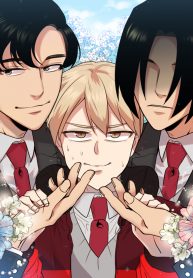 Minkyu’s heart is pounding in his ears as he waits for Jung-yun, his dream girl, up on the roof of the school. Today, he got her number off the class contact list and finally mustered up the courage to text her. Now all he has to do is ask her out. Minkyu hears the door creak. Jung-yun’s here! Too embarrassed to look her in the eye, he blurts out his feelings for her and pops the question. “Okay,” a guy who is definitely not Jung-yun answers. Startled, Minkyu turns around to find Jung-hyun with an “h” blushing in front of him. Wait, wait, waaaait… Did he just ask out a dude? And did the dude just say yes? Does that mean he now has a 192 cm-tall, curtain-haired boyfriend? What the heck is going on?!